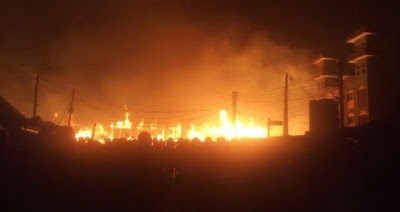 The Amu market in Mushin, Lagos State was reportedly gutted by fire early hours of this morning.

An eyewitness wrote on twitter; ”They are fire fighters on ground but can control it.. Another Federal Fire fighter tank and Julius Berger just arrived. The chemicals(Gum, thinner, paints) they sells is making the mata worsen”

Mushin Amu Market is on Fire as at 2:10am
pic.twitter.com/hwKiKaU00K