When Jade Ullrich, 29, and her sister Georgia, 26, found out they would experience pregnancy together at the same time, and that their due dates were just two days apart, it ‘felt like a dream come true’.

But then the coronavirus pandemic hit, and visions of shared pregnancy photoshoots and celebrations fell apart.

The sisters were forced to isolate separately. When their babies finally arrived, they were introduced through a window.

Jade, who runs Bay Holiday Home Management with her fiancé Michael, tells Metro.co.uk: ‘It’s my sisters first child so I really wanted to experience it closely with her, with antenatal classes and baby shopping trips.

‘We were waiting for the third trimester to organise a shopping trip to Exeter and book in a sisters bump photoshoot, which we never got to do.

After finding out they were both expecting in August 2019, both Georgia and Jade saw out their final weeks of pregnancy in lockdown.

Preparing to give birth in a pandemic was tough.

‘Beyond not making the memories we’d hoped for, I suffered terribly with anxiety around our planned home birth,’ Jade tells us. ‘As new guidelines were being published about pregnant women and their vulnerability to coronavirus and new restrictions were being placed upon expectant parents in hospitals, I began to wonder whether any of those changes would affect us, as well as desperately wanting to avoid the hospital all together even for scans, check ups and feeling anxious about ending up in hospital without my fiancé as my support.’

The anxiety was especially difficult for Jade, who had already gone through the trauma of experiencing bleeding and contractions early on in her pregnancy.

The fear of harm coming to her child was overwhelming.

‘In the first trimester, while we were celebrating my partner’s birthday I suddenly suffered a bleed with contractions,’ says Jade. ‘I was taken to hospital by ambulance and given morphine for the pain.

‘We were devastated when the consultants began to discuss the possibility of me having a miscarriage.

‘As I started to come to terms with the reality that I may have been miscarrying, I began to wonder how I’d cope watching my sister flourish through her pregnancy and birth my niece that would have been the same age as our new baby.

‘Finally, we got our scan, every doctor and consultant had been convinced that we were miscarrying with one even saying “It’ll be a miracle if this pregnancy continues” when I asked for their professional opinion on my symptoms.

‘Before we entered the scanning suite, Michael embraced me as he told me he was sure everything was going to be okay, we’d get our miracle.

‘Our lives changed in the space of five minutes, we opted to see the monitoring screen as they began to scan me and immediately we saw a heartbeat and both burst into tears of joy.

‘After the most stressful three days of our lives with little sign of hope, our little miracle was still with us.’

After months of worry, Jade welcomed Honey shortly after midnight on 21 April 2020, just weeks after the arrival of Georgia’s daughter on 3 April.

Georgia had planned for a hospital birth and was induced on 3 April. She was told on arrival at the hospital that new coronavirus guidelines prevented her partner, Dave, from joining her in the room.

He was able to return once Georgia was fully in labour and Jade provided additional support over FaceTime. Just a few hours later baby Scarlett arrived.

Jade was lucky to be able to stick to her plans of an at-home water birth despite the pandemic, and gave birth to her baby girl with just Michael and their midwife by her side.

Unfortunately the mum-of-three suffered from retained placenta after the four-hour labour, and had be taken to the hospital by an ambulance for treatment – but Jade calls this ‘a small price to pay for a happy healthy baby and a magical waterbirthing experience’.

Now the sisters are both adjusting to life as mothers to newborns in lockdown.

Seeing each other’s daughters for the first time had to take place through a window due to social distancing measures, with the sisters catching up from a two-metre distance in the garden. 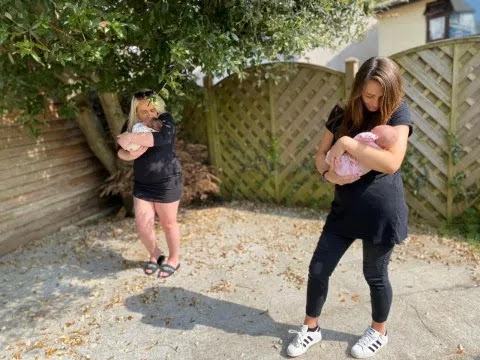 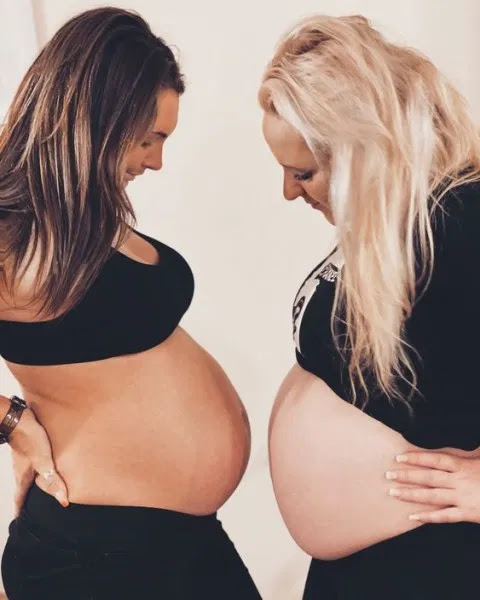 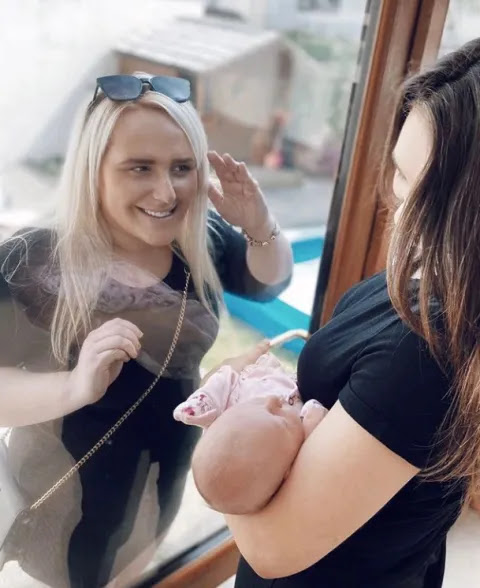