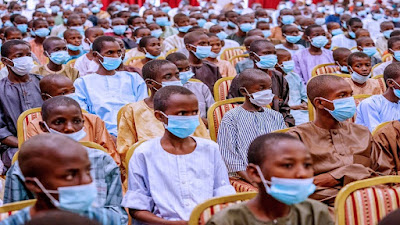 The United Nations has condemned President Muhammadu Buhari’s regime on its handling of the investigation regarding the abducted Kankara schoolboys.

The schoolboys were kidnapped in Katsina, Mr. Buhari’s home state.

The UN panel of experts disclosed this in a statement on Wednesday in Geneva, Switzerland.

“We are concerned about the total lack of transparency and effective action almost three months later,” they said.

“There has still not been an impartial, independent investigation into the abductions nor specialised rehabilitation for the children after the incident,” the statement added.

The experts urged Mr. Buhari’s regime to prioritise the rehabilitation of schoolchildren traumatised due to the abduction.

The UN also called on the president to strengthen the security measures for those at risk since it is the government’s sole responsibility to protect the citizens.

It noted that there was a high rate of insecurity in the North, affecting mostly females subjected to gender-based violence.

“We are alarmed at reports that an unknown number of women and girls have been abducted in recent years and subjected to domestic servitude, forced labour, sexual slavery through forced marriages, forced and unwanted pregnancies.

“Serious concern is expressed about the physical and psychological integrity of these individuals, who are at increased risk of exploitation, trafficking, sexual and gender-based violence and other forms of violence,” they said.

The experts appealed to the Nigerian government to conduct independent investigations without any further delay.