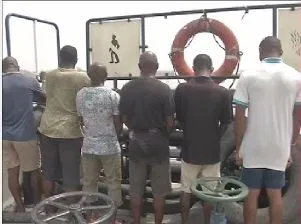 Six crew members of a nine – tanker vessel laden with poorly Automated Gasoline Oil are cooling their heels in the custody of the Economic and Financial Crimes Commission.
Arrested by the Navy along the waterways of Brass, on the 9th of January, the suspects were in a vessel containing one million litres of petroleum products identified as illegally refined diesel.
Ovieteme George reports that one after another, the six suspects were made to disembark from the vessel “MV Gratitude” laden with one million litres of a product identified as illegally refined diesel.
The Commanding Officer Forward Operating Base, Commodore Suleiman Ibrahim made a juxtaposition of samples of petroleum products.
“MV Gratitude” the vessel conveying the product and the Six -Man crew have been handed over to the Economic And Financial Crimes Commission.
2020-01-25
talkagblog