Retired judge, 60, is found dead after falling and hitting her head in her hot tub on Christmas Day 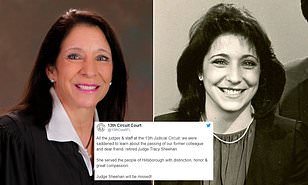 A retired judge drowned in her hot tub on Christmas Day after accidentally falling and hitting her head in her new Georgia vacation home, according to investigators.

Tracy Sheehan, 60, was found face down in the water by a concerned neighbor after they heard her dog barking at her cabin in Blue Ridge.

Sheehan – who was also a former TV anchor and had survived breast cancer was a judge in Hillsborough County, Florida, for 11 years until 2017.

She is understood to have been dead for several hours when she was found in the home she purchased in October.

An autopsy report and toxicology results are still pending.

Fannin County coroner Becky Callihan told The Tampa Bay Times: ‘They found evidence where she had hit her nose. Her glasses had scratched her nose when she went down.’

Sheehan, described by friends as ‘inspiring and fierce’ was known for driving a Harley Davidson to work.

Following the news of her death the Florida 13th Circuit Court tweeted: ‘All the judges & staff at the 13th Judicial Circuit, we were saddened to learn about the passing of our former colleague and dear friend, retired Judge Tracy Sheehan.’

They added: ‘She served the people of Hillsborough with distinction, honor & great compassion. Judge Sheehan will be missed!’

‘She will be missed by all who encountered her.’