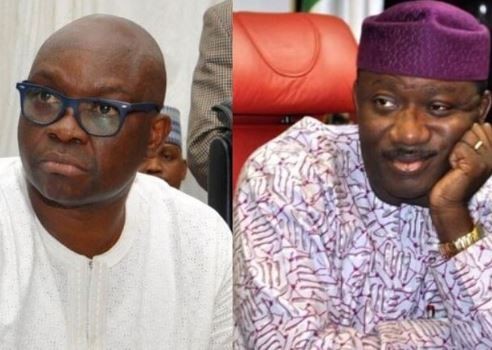 Outgoing Ekiti state governor, Ayodele Fayose who has about 35 days to leave office has said his handover notes are ready for the scrutiny of people making enquiries about his government.

According to a report by the News Agency of Nigeria, the governor did not cooperate with the Transition Committee set up by Incoming-Governor, Kayode Fayemi. He  snubbed the request by the committee, for certain records of his tenure. He claimed the committee is illegal.

Fayose, in a statement by his Special Assistant on Public Communications and New Media, Lere Olayinka, urged the Governor-elect to stop spreading falsehood about him or the finances of his administration. He described as mere fabrication, the claim that his government had accumulated a debt of N117 billion as against the N18 billion it inherited.

Fayemi is “already preparing excuses for his impending failure at the tribunal”, Fayose said.

Fayose insisted that the State Government under him has no obligation to relate with any committee not empowered by law, stating that the governor-elect should wait for the handing over note that will be handed to him on October 16. He said it was funny that the same Transition Committee that claimed it did not get any information from the State government estimated the state debt at N117 billion.

The governor counselled Fayemi to face the task of “defending the mandate that he stole and his fraudulent emergence as the APC candidate instead of treading the usual path of deceiving the public to cover up his failure”.