Zimbabwe’s President Emmerson Mnangagwa won election Friday with just over 50 percent of the ballots as the ruling party maintained control of the government in the first vote since the fall of longtime leader Robert Mugabe.

Mnangagwa received 50.8 percent of the vote while main opposition challenger Nelson Chamisa received 44.3 percent. The opposition is almost certain to challenge the results in the courts or in the streets.

While election day was peaceful in a break from the past, deadly violence on Wednesday against people protesting alleged vote-rigging reminded many Zimbabweans of the decades of military-backed repression under Mugabe.

Zimbabwe’s president says he is “humbled” by his win.

“Though we may have been divided at the polls, we are united in our dreams,” Mnangagwa said on Twitter.

“This is a new beginning. Let us join hands, in peace, unity & love, & together build a new Zimbabwe for all!” Mnangagwa tweeted, after a week that began with peaceful voting Monday but spiraled into deadly violence in the capital Wednesday as the military fired on protesters.

Western election observers who were banned in previous votes have expressed concern at the military’s “excessive” force in the capital, Harare. Their assessments of the election are crucial to the lifting of international sanctions on a country whose economy collapsed years ago. 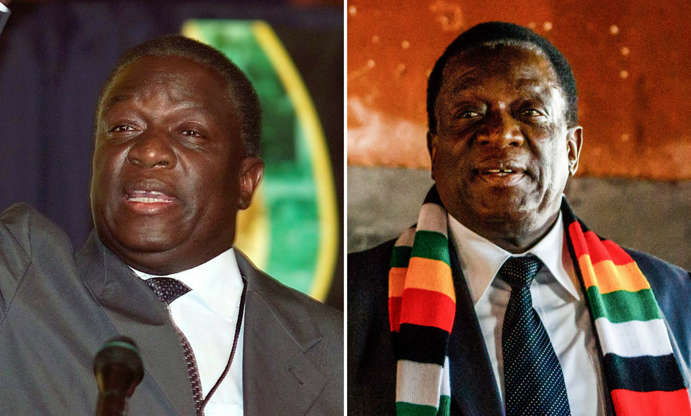 Shortly before the election commission’s announcement, Morgen Komichi, the chief agent for Chamisa’s opposition alliance, took the stage and said his party “totally rejects” the results and said he had not signed the election results. Police escorted him from the room.

Later Komichi said the elections were “fraudulent” and “everything has been done illegally.” He said he had refused an electoral commission request to sign papers certifying Mnangagwa’s win.

“We’re not part of it,” said Komichi, adding that the opposition would be challenging the election in the courts.

Commission chair Priscilla Chigumba urged the country to “move on” with the hopeful spirit of election day and beyond the “blemishes” of Wednesday’s chaos: “May God bless this nation and its people.”

With the military still deployed in Harare, the capital’s streets were quiet following the announcement of Mnangagwa’s victory.

By the center where the election results were announced, Charity Manyeruke, who teaches political science at the University of Zimbabwe, said she was delighted.

“There is continuity, stability,” Manyeruke said. “Zimbabwe is poised for nation-building.”

The signs that Mnangagwa’s election will be disputed appears to deepen a political crisis that was worsened by Wednesday’s violence in Harare as the military swept in with gunfire to disperse opposition supporters alleging vote-rigging.

The death toll rose to six, with 14 injured, police said, and 18 people were arrested at the offices of the main opposition party amid tensions over a vote that was supposed to restore trust in Zimbabwe after decades of Mugabe’s rule.

While Mnangagwa and the ruling party accused the opposition of inciting the violence, the opposition, human rights activists and international election observers condemned the “excessive” force used against protesters and appealed to all sides to exercise restraint.

Police raided the headquarters of Chamisa’s Movement for Democratic Change party while a lawyers’ group said Chamisa was being investigated for allegedly inciting violence. He and several others are suspected of the crimes of “possession of dangerous weapons” and “public violence,” according to a copy of a search warrant seen by The Associated Press.

Chamisa, however, said police seized computers and were looking for what he called evidence that his party had gathered of vote-rigging by Mnangagwa’s party. The evidence already had been moved to a “safe house,” he said.

Mnangagwa called for an “independent investigation” into Wednesday’s violence, saying those responsible “should be identified and brought to justice.”

Mnangagwa was a longtime Mugabe confidante before his firing in November led his allies in the military to step in and push Mugabe to resign after 37 years in power. Thousands of jubilant Zimbabweans celebrated in the streets of Harare, greeting the military with selfies and cheers.

Since taking office, the 75-year-old Mnangagwa has tried to recast himself as a voice of reform, declaring that Zimbabwe was “open for business” and inviting long-banned Western election observers to observe Monday’s vote, which he pledged would be free and fair.

A credible election after past votes were marred by violence against the opposition and alleged irregularities is crucial for the lifting of international sanctions and for the badly needed foreign investment to help Zimbabwe’s long-collapsed economy revive. Mnangagwa himself remains under U.S. sanctions.

While Monday’s election has been widely judged as peaceful with a high turnout, the deadly violence that erupted on Wednesday brought back chilly memories of decades of repression under Mugabe.

It was a reminder, as opposition leader Chamisa declared Thursday, that “‘We have removed Mugabe but not Mugabe-ism.”

The military deployment was the first time that soldiers had appeared in the streets of the capital since Mugabe’s resignation. Some Harare residents expressed frustration and exhaustion at the dramatic change from November’s exuberant expression of hope to the current tensions.

“We are a peaceful nation,” said 29-year-old Sifas Gavanga of the latest chaos. “We don’t deserve the death we saw.”

Three persons were killed with property worth N860 million destroyed in ...