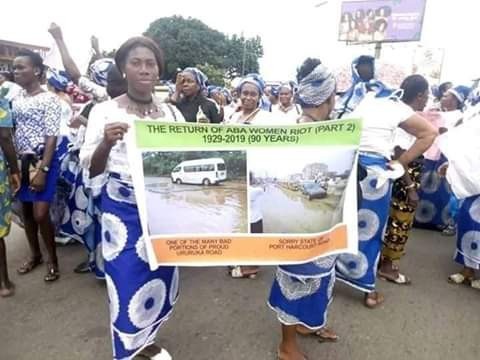 Angry women in Aba on Tuesday, besieged the streets to protest over the deplorable state of roads in the city.

The women numbering over  200, lamented, calling on Abia state governor, Dr. Okezie Ikpeazu, to repair and construct the roads.

They lamented over lack of good roads in Aba, non-payment of salaries, poor power supply, and unemployment, among others and called on the governor to, as a matter of urgency, expedite action to address these issues.

Speaking to newsmen, a trader at Ahia Ohuru, who gave her name as Gift Uchendu, said being a trader in Aba has now turned to a curse as it is difficult for them to go to the rural areas to buy products like food stuff for sale, stating that despite being promised earlier, they are disappointed that Governor Ikpeazu is yet to give Aba the attention it requires.

The women said that they are giving Governor Ikpeazu 90 days to fix the roads in Aba or face their wrath.