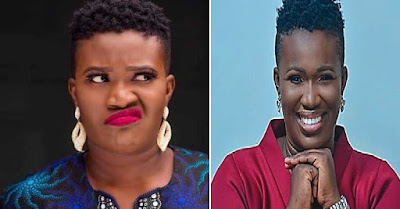 In recent times, diehard fans have been showing their allegiance to their favourite celebrities by drawing tattoos of their names and/or faces on their bodies. This has expectedly generated diverse reactions with people condemning and commending the acts in equal measures.

Baring her mind on the new development, comedienne, Anita Asuoha, better known as Real Warri Pikin, stated that she would neither condemn nor encourage anyone to draw a tattoo of her on their body. She told Sunday Scoop, “I feel people have different ways of expressing and showing love. Personally, I do not like tattoos but I don’t know if that may change in the future. If it was temporary, it would clear off over time. However, if drawing tattoos makes anyone feel satisfied, they should go ahead and do it. One cannot tell people how to live their lives after all. Tattoo serves different purposes for people and their role models.

“For example, people have different reasons for following me online. I once asked a lady why she used my image as her profile picture on Instagram for years and she said I had motivated her in ways I was not even aware of. People love differently and have weird ways of showing it.  I have seen fans that idolise me and practically imitate everything about me. Meanwhile, some followers could be unhealthy and toxic. However, I would neither condemn any fan for showing me love by tattooing my image on their body, nor encourage them. That is the level of their understanding at that time so one should not publicly condemn them for it. I also think celebrities should not encourage their fans to do that because tattoos are permanent. I am a ‘suicide candidate’ too, so I know what some young people can do. Little things could set some people off.  I feel the way Bobrisky reached out to people who tattooed his name and face is a better approach. He appreciated the love shown towards him. I have once gone through rejection from the people I needed help from too.”