Covid-19 positive bride says ‘I do’ from parents’ window 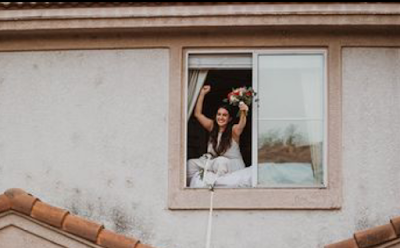 This wedding gives “in sickness and in health” a whole new meaning.

Riverside, California, couple Lauren and Patrick Delgado were forced to tie the knot while separated by a literal rope after the bride tested positive for Covid-19 just days before their scheduled nuptials, according to a report.

The ceremony was held Nov. 20 at Lauren’s family home in Ontario, California, while she isolated herself from the groom and wedding guests in a second-story bathroom, reports KTLA.

She told the station that she and her husband-to-be were forced to change their plans several times to adapt to the rapidly changing pandemic.

“We were cautious throughout the entire time, making sure that we always wore our masks everywhere,” Patrick Delgado said.

“When she got that positive test result, I’ll be honest, it took a massive toll on her.”

But after the couple rescheduled the ceremony three times and with the clock ticking on their marriage license, the couple decided to hold the Nov. 20 ceremony anyway — with just 10 people in attendance.

With Lauren sitting in the second-story window of her parent’s house and Patrick standing in the front yard, both lovers held on to a rope which was used to signify their commitment to each other. 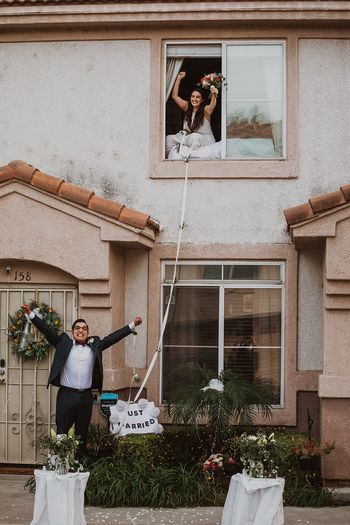 “I always dreamt of getting married. I never expected this is how it would turn out,” Lauren said.

This week, after isolating for 10 days, Lauren and Patrick finally saw each other for the first time as a married couple.

The couple plans to renew their vows and hold a big celebration next year, on their first anniversary.