For 32-year-old Iranian Shohreh Bayat, the Women’s World Chess Championship was meant to be a career highlight.

It is her first time as the event’s chief arbiter – a senior role.

But that achievement has been clouded by controversy after the circulation of a photograph taken at game in Shanghai that appears to show Ms Bayat without a headscarf, as her country mandates.

She now feels unsafe to return to Iran, where women can be arrested for violating strict Islamic dress code.

“I turned on my mobile and saw that my picture was everywhere [in Iranian media]. They were claiming I was not wearing a headscarf and that I wanted to protest against the hijab,” Ms Bayat told the BBC.

She says she was, in fact, covering her head as she always has at international tournaments, despite disagreeing with the rule.

“It’s against my beliefs. People should have the right to choose the way they want to dress, it should not be forced,” she explained, speaking from Vladivostok in eastern Russia, where she is now refereeing the second leg of the World Championship.

“I was tolerating it because I live in Iran. I had no other choice.”

But this time Ms Bayat has run into serious problems.

The photographs circulating online and being discussed by Iran’s state media show Ms Bayat’s scarf apparently draped over her shoulders and not over her hair. In other pictures from the same day, her head is clearly – albeit loosely – covered.

Ms Bayat says Iran’s chess federation instructed her to “write something” in response to the fuss, which she took to mean an apology and a defence of Iran’s dress code.

So now she says it’s too risky to return to her family.

“There are many people in prison in Iran because of the headscarf. It’s a very serious issue. Maybe they’d want to make an example of me,” she explains, adding that she had “totally panicked” when she saw the reaction online. 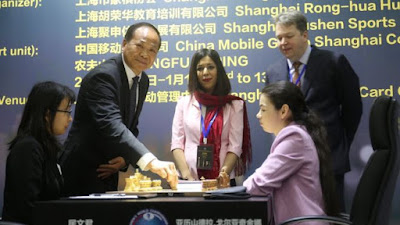 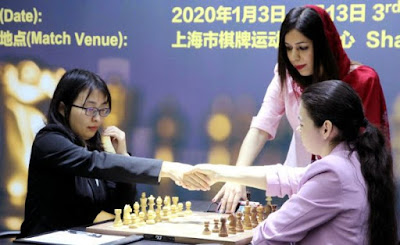