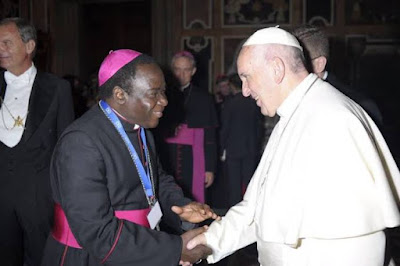 Bishop of Sokoto Catholic Diocese , Mathew Hassan Kukah has been appointed as a Member of the Dicastery for the Promotion of Human Integral Development by Pope Francis

This is contained in a statement signed by the Director, Social Communications Catholic Diocese of Sokoto Reverend . Father Christopher A. Omotosho and made available to newsmen

According to the statement the appointment was contained in a letter to Bishop Kukah dated 11th December, 2020, and signed by His Eminence, Peter Cardinal Turkson, the Prefect of the Dicastery.

By this appointment, Bishop Kukah will join other members of the Dicastery drawn from different regions of the world to advise and promote the holy Father’s concerns on issues of justice and peace, human rights, torture, human trafficking, care of creation and other issues related to the promotion of human dignity and development.

The appointment, which is renewable is for an initial period of five years. The Council will be formally inaugurated on a later date.