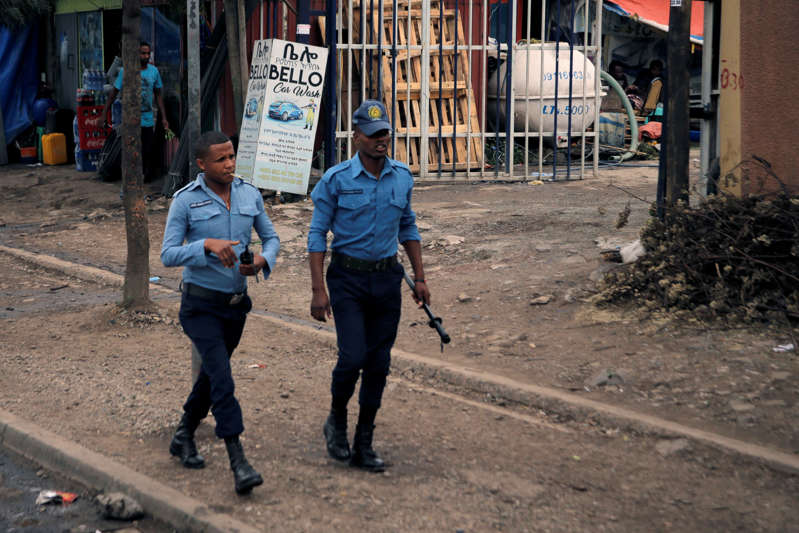 Security forces in Ethiopia’s eastern Somali region on Monday shot dead four people protesting against the looting of their shops and homes in weekend unrest, a witness said.

Violence broke out in the provincial capital Jijiga on Saturday, with mobs looting properties owned by ethnic minorities, in unrest that the government said had been stoked by regional officials at odds with central authorities.

The attacks forced thousands to seek refuge in an Ethiopian Orthodox church from Friday, residents told Reuters. On Monday, some of them staged a protest.

“They blocked a road surrounding the church to demonstrate, before security forces arrived and began firing indiscriminately,” one resident of the town told Reuters.

The witness, who declined to be named, said he saw four bodies on the ground after the crowd dispersed. Gunfire rang out throughout the day.

At least two Ethiopian Orthodox churches were also burned down over the weekend, other residents told Reuters.

Amid the violence, the region’s president Abdi Mohammed Omer stepped down late on Monday, state-owned media outlets said. The agencies did not offer any explanation for his resignation.

But earlier, government spokesman Ahmed Shide had said regional officials were stoking violence at a time when attempts were being made to address rights abuses in the region.

He said the officials claimed the government was illegally forcing them to resign, and that a regional paramilitary force had taken part in the attacks under their orders.

“Infrastructure was destroyed and civilians were subjected to killings and lootings. Religious centres were also attacked and banks looted,” he said at a news conference.

“These acts were carried out by gangs of youths that were organised by some members of the region’s leadership.”

Witnesses told Reuters that soldiers were deployed as early as Friday evening. But Ahmed said orders were given only on Monday and that they would soon “start operations” to restore calm.

The Somali region has seen sporadic violence for three decades. The government has fought the rebel Ogaden National Liberation Front (ONLF) since 1984 after the group launched a bid for secession of the province, also known as Ogaden.

Since 2017, clashes along its border with Oromiya province have displaced tens of thousands of people.

In July, the region’s officials were accused by the government in Addis Ababa of perpetrating rights abuses. Last month, authorities fired senior prison officials there over allegations of torture.

The unrest in the province marks a first test for new prime minister Abiy Ahmed, who has pledged transparency and a crackdown on abuses by security services

Previous: 116 Nigerians in Libya slave camps – FG
Next: Heartbreaking moment teenager cuddles her boyfriend on his deathbed before life support is switched off

Man Arrested After Having Public S3x With A Dog

The federal government says the Second Niger Bridge will open to traffic ...