Soldier who raped AAU student says he is mentally unstable, begs for bail 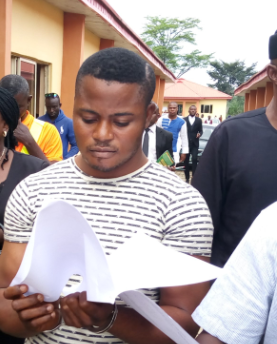 The magistrate court today heard his bail application. The prosecution counsel, Adeoye Adesegun, had asked the court to remand the suspect in prison.

The defence counsel, Kayode Ikotun, however objected to the remand request. According to Ikotun, Awolola was facing “psychiatric health challenges” and should be granted bail. He argued that the suspect, whose wife recently put to bed, was deployed to Akure from Maiduguri to take care of his health and family.

After much arguments,Mayowa Olanipekun of the magistrate court ordered that the soldier be remanded in custody at the Olokuta Maximum Prison pending legal advice from the Ministry of Justice. He added that the original case file of the suspect should be duplicated in the office of Department of Public Prosecution (DPP) of the Ministry.

The case was adjourned until November 15th.