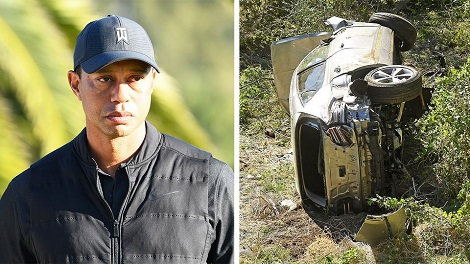 Tiger Woods has spoken out following the Feb. 23 car crash that left him with serious injuries.

In his first public statement since the accident, the professional golfer thanked his fans for their support as he begins on the road to recovery.

“It is hard to explain how touching today was when I turned on the tv and saw all the red shirts,” Tiger tweeted. “To every golfer and every fan, you are truly helping me get through this tough time.”

At the WGC-Workday Championship on Sunday, Feb. 28, several golfers, including Rory McIlroy and Patrick Reed, played in red shirts and black pants, an homage to Tiger’s signature uniform on the green.

According to the Los Angeles Sheriff’s Department, the crash occurred just after 7 a.m. on Tuesday Feb, 23 in Rancho Palos Verdes, a city located in southwest Los Angeles. Tiger, who was the sole occupant of the vehicle, is said to have been driving at a “relatively greater speed than normal” down a hill when he hit the center median, crossed into the opposing lane of traffic and landed in nearby brush. The 2021 Genesis Tiger he was driving sustained “several rollovers,” police said.