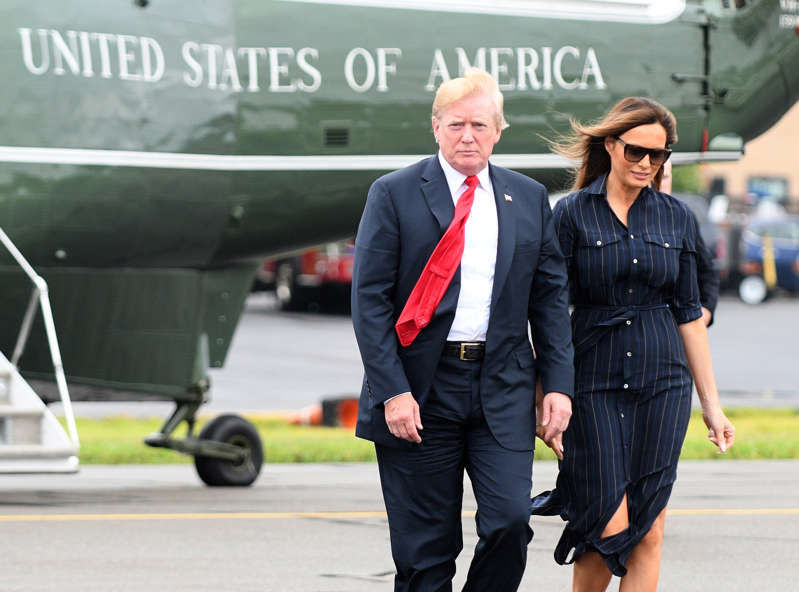 President Donald Trump is considering revoking the security clearances of at least half a dozen well-known former national security officials, his spokeswoman said Monday, in an extraordinary expression of his desire to punish increasingly vocal critics from past administrations.

However, neither Comey nor McCabe still has a clearance, according to their representatives, suggesting that the White House had not fully considered the threatened action before making it public.

Sanders, addressing White House reporters, said of the targets: “They’ve politicized and in some cases monetized their public service and security clearances, making baseless accusations of improper contact with Russia.”

The president’s decision to align himself with Russia rather than U.S. intelligence agencies, which he later tried to walk back, led to a new round of speculation that Trump is somehow under Putin’s influence, perhaps because of blackmail or financial entanglements. That speculation remains unproven.

Since returning from Helsinki, Finland, Trump has grown more agitated by condemnations from former officials who have become paid analysts for cable news networks, leaving him eager to find a way to fight back, according to two people close to the president.

The threat, however, drew only more condemnation.

“To strip individuals of security clearances absent specific evidence of improper or illegal use of classified information is seriously wrong,” tweeted Richard Haass, president of the Council on Foreign Relations and a former diplomat who served in both Bush administrations. “It represents a degree of politicization and a misuse of power that we associate with Erdogan’s Turkey, not with the United States.”

The talk of stripping Comey’s and McCabe’s nonexistent security clearances also invited ridicule of a White House whose competence frequently is questioned.

“You would think the White House would check with the FBI before trying to throw shiny objects at the press corps,” tweeted Melissa Schwartz, a spokeswoman for McCabe, who said his clearance was deactivated when he was fired.

The same goes for Comey, said David Kelley, one of the former director’s lawyers. Trump fired Comey in May 2017, a decision that led to the appointment of Robert S. Mueller III as special counsel to investigate Russian election interference, possible Trump campaign involvement and whether the president obstructed justice in the inquiry.

Sanders would not rule out some kind of similar action against the clearances held by Obama and his vice president, Joe Biden.

“I’m not aware of any plans for that at this point,” she said.

If Trump decides to revoke the clearances of the former officials, many of whom spent decades in government or military service, or both, they would no longer be permitted to review classified material. Former national security officials maintain their clearances in part because they are called upon by subsequent administrations or Congress for advice or service on advisory panels.

Soon after Sanders’ remarks, Clapper called the potential revocation “a very, very petty thing to do” in an interview with CNN, where he has a contract as an analyst.

“I don’t go back for classified briefings,” he said on Twitter. “Won’t have any effect on what I say or write.”

All of the officials named by Sanders have been critical of Trump, although Brennan has been particularly outspoken.

“Not only were Trump’s comments imbecilic, he is wholly in the pocket of Putin,” Brennan said on Twitter last week.

Brennan, who serves as an analyst for NBC and MSNBC and has been described as a “total low life” by Trump, did not immediately respond to a request for comment.

“Is John Brennan monetizing his security clearance? Is John Brennan making millions of dollars divulging secrets to the mainstream media with his attacks on @realDonaldTrump?” Paul tweeted, without citing evidence for his figures.

When a White House reporter asked Sanders at her briefing about the senator’s advice, she not only confirmed that Brennan’s clearance is under review but also named the five other people, provoking a round of questions from the news media about the unusual threat.

Rep. Adam B. Schiff of California, the top Democrat on the House Intelligence Committee, said Trump was politicizing access to classified information.

“An enemies list is ugly, undemocratic and un-American,” he said on Twitter. “Is there no length Trump will not go to stifle opposition?”

One common denominator that has fueled Trump’s anger in recent days has been television — specifically, the unrelenting criticism he’s received on cable news programs, even at times on Fox News.

As the president flew home from Helsinki last week, the coverage of his summit with Putin was more negative than he had anticipated. Then on Friday, Director of National Intelligence Dan Coats gently disagreed with the president’s handling of the meeting while being interviewed live on television from a security conference in Aspen, Colo.

Accustomed to dominating the airwaves, Trump has bristled at the attacks, according to two people close to the president who spoke anonymously to comment on internal discussions. The fact that some of the critics have paid contracts with cable networks only stokes his anger, though Trump supporters are paid for commentary as well.

“He doesn’t like criticism, but he can usually handle it,” said one friend of the president who requested anonymity to discuss private conversations. “But the fact that all these people are being paid by the networks to go on and beat him up, that’s getting to him.”

The fixation on television contracts extends to newspaper reporters who are paid by cable networks.

In a TV interview Saturday night, presidential adviser Kellyanne Conway accused “print journalists” of “performing for the cameras and the viewers on those particular networks.”