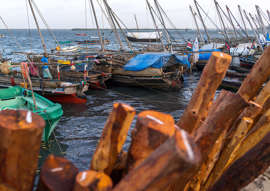 Some 46 people from the Coast have gone missing as the war on terror and criminal gangs intensifies.

Human rights lobby, Haki Africa, said the missing, who are from six Coast counties, could have been abducted by security agencies.

“We have received so many complaints from various families blaming the security agencies especially the Kenya Defence Forces and the police on the disappearances of their kinsmen. We have recorded 46 cases of killings and disappearances of locals in the Coast region between January and July this year, “said Haki Africa’s executive director Hussein Khalid at a press conference in Mombasa on Wednesday. The organisation gave the names of those it believes were abducted by police but said 46 cannot be accounted for.

Regional police commander, Mr Noah Mwivanda, however denied that the police are involved, saying: “The work of the police is to protect life and property which we cannot go against. We are not involved in those cases whatsoever.”

Mr Mwivanda said claims of missing people were being spread by terror gang recruiters and that police were investigating individuals believed to be behind the reports.

“The Al-Shabaab recruiters are doing this so that they can leave no trace when the youth leave for Somalia. This helps the youth when they return home because no one would suspect they had joined the terror groups,” he added.

But Haki Africa said the disappearances started in 2014 when the worst ever terror attack at the Coast was recorded in Mpeketoni, Lamu, leaving hundreds dead.

More people disappeared in 2015 when the multi-agency security operation to flush out Al-Shabaab militants from Boni forest dubbed ‘Operation Linda Boni’ was launched, said the organisation.

One of the cases involves Mohamed Abdalla Ali, 32, who went missing on the night of June 14.

Mr Ali, a resident of Witu in Lamu West was said to have been watching a World Cup match in one of the hotels in the town but could not be traced when the game was over.

His father Abdalla Basalama, a retired AP senior Sergeant, said Ali completed his secondary education at Witu Secondary School and is the last born in a family of five.

According to Ali’s eldest sister Amina Abdalla, police have not been helpful despite numerous attempts by the family to involve them in the search.

“We have filed a missing person report at the Witu Police Station, Mokowe, Mpeketoni, Hindi as well as Lamu town police stations but nothing has been forthcoming. The way the police are distancing themselves from this issue makes us suspect that they know where he is or what happened to him. We need the police to come clear on this,” said Ms Abdalla.

According to Abdalla, the disappearance of her brother has weighed heavily on their father’s health which she said gets worse with each passing day that his son does not come home.

“My father was diagnosed with diabetes and high blood pressure shortly after Ali disappeared and he has been getting worse with each passing day. The only remedy will be when Ali comes back alive or dead. He will have closure,” said Ms Amina.

Another family is agonizing over the mysterious disappearance of their relative, a 43-year-old Mohamed Avukame Haroun.

Mr Haroun, a Malindi businessman who dealt in property management and land, is said to have been abducted by men in a black Toyota Prado and driven to an unknown  destination.

Haroun’s elder brother, Bwanaheri Avukame Haroun said the father of two was bundled into the car by two armed men who approached him as he stood outside the Mombasa High Court on August 23, last year.

“We believe that those who took my brother are police officers since they had handcuffs and were armed with pistols. They roughed him up, bundled him into the car and drove away. Since then, my bother has never been seen. His phone has not also been going through,” said Mr Bwanaheri.

He said when the incident happened, his brother was following up on land issues involving the Manda Settlement Scheme in Lamu.

“Earlier, my brother had informed me that unknown people had called him that week and warned him to leave the issue of Manda lands. They even promised to give him money but he refused. He had told me that his life was in danger only for the incident to happen the following day. Let the government come clear on this since we believe our brother was taken away by state agents,” said Mr Bwanaheri.

At Mkunumbi in Lamu West, the family of Makka Mzee is still in the dark over the whereabouts of their kin who has been missing since March 31, 2015.

Imrana Said Makka,29, a father of three, is said to have been taken by three men who identified themselves as anti-terror officers in Malindi town.

“Almost four years gone by yet we don’t know where our brother is. I wish someone would tell us something. The government is silent despite the numerous reports we have filed. We should know who arrested or abducted our brother and the reasons behind it,” said Imrana’s sister Sada Said Makka.

At Kwasasi area in Hindi Division, Lamu West, another family is undergoing the same agony following the disappearance of 42-year old Ali Bunu, a farmer who owned an estate at Kwasasi Village.

The father of nine was said to have been picked up at his farm by unknown people in police and military vehicles on the night of April 8, 2016.

He was bundled into a vehicle together with his four workers and a nephew.

All except Bunu were later dumped in the bush near the Bargoni military camp from where they found their way back he next day.

According to Bunu’s sister Hafswa Hobeni, efforts to seek legal redress on the matter have been futile.

“It’s really stressing us as a family. It has become very hard to process any document for the children whether its birth certificate or passports since they don’t have their father’s ID card or even death certificate . Raising all the nine children is also tough going with the current economic challenges,” said Mrs Hobeni.

Mr Majid Hobeni, Bunu’s brother said he has searched for him in all police stations in Lam.

“The State is better placed to answer our queries since the vehicles that picked up my brother were clearly marked with government number plates as we were told by my brother’s staff who were released. We haven’t had peace of mind since my brother was taken. Those arrested alongside him told us that he was killed but we haven’t found his body. We are looking forward to the state to tell us what happened to my brother,” said Mr Majid.

During the incident, Mr Bunu’s house and livestock were also set on fire by the officers before he was whisked away to an unknown destination on that night.

At Mpeketoni in Lamu West, a family of 35 year-old Osman Abdi is also in the dark after the man went missing in mysterious circumstances just days after the June 15, 2014 Mpeketoni attacks.

Mr Abdi, a milk vendor is said to have been arrested by police but he has never been found.

In Pate village in Lamu East, the family of Mr Bakari Mohamed Abdulrahman has found solace after years of searching for their son who had gone missing in 2012.

He had travelled from Mombasa after visiting his ailing grandmother in his home village of Pate but is said to have vanished when he reached Witu town.

His family later learnt that he had crossed over to join Al-Shabaab militants in Somalia from where he died in 2015 after Kenyan troops in the war-torn country raided one of the biggest Al-Shabaab camps.

In Mombasa, the family of Husni Mbarak, 18, who was forcefully bundled into a White Toyota Fielder on May 25 is in agony.

The teenager was coming from a butchery heading to his father’s garage when he was captured by four men believed to be police officers.

Mbarak’s friend who witnessed the incident said the four men forcefully pushed his colleague into the car and sped off.

“We were seated in the garage when we heard someone screaming, when I came out I saw Husni fighting with the men who were forcing him into the car,” said the colleague whom we cannot name for his security.

He said the men brandished out their pistols to scare away onlookers.

“They said they were officers and when they removed out their firearms that is when we let it go. We were really shocked on what had just happened,” said the witness.

Some of the others whose whereabouts are unknown are Khalifa Mohammed, Abubakar Abdulkadir, Abdulrahman Mohammed and Raphael Onyimbo, 20, from Changamwe. Abubakar is the father of terror suspect Abdulkadir Abubakar, who has a Sh2 million bounty on his head.

Abdulrahman Mohammed and Raphael Onyimbo went missing on November 10 and March 7 respectively. Their families suspect that they were taken away by police or recruited by terror groups.