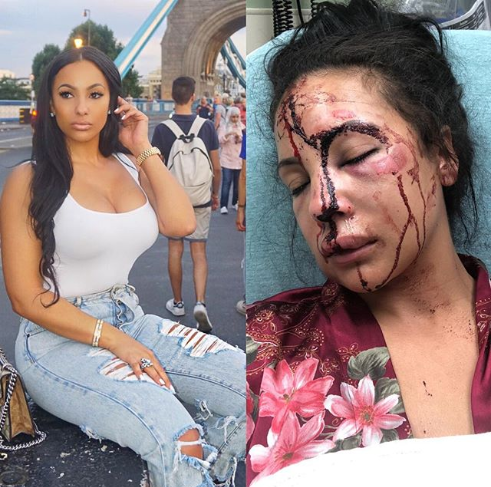 LeSean McCoy, an American football running back for the Buffalo Bills of the National Football League, has been accused of battering his girlfriend Delicia and a photo of her bloodied face has been released.

Following the brutal beating, Delicia’s friend, Mia, went to Instagram to expose LeSean, aka Shady. She accused him of beating his dog until it suffered kidney failure. she also accused him of abusing his son at every slightest opportunity, including for wetting the bed. She said they covered up for him in all of these but they were done covering for him now because of what he did to his girlfriend.

Mia wrote: “@shadymccoy is THE DEVIL!!! YOU ARE AN ANIMAL!!!!!! We didn’t say anything about how you beat your dog “Henny” into kidney failure. Let’s not talk about all the times my best friend had to stop you from VICIOUSLY beating your son for small things like peeing in the bed. We kept quiet about your drug usage … all the ILLEGAL steroids and needles you were using, but we will not keep quiet about this!!!!!! I can’t believe you did this to my best friend!!!!! YOUR KARMA IS GOING TO BE SO REAL!!!!!! The world needs to know what type of animal you really are!!!!!!! This was just her yesterday on the left and now this morning this is her on the right!!!! #WomanBeater#AnimalAbuser #ChildAbuser @nfl@tmz_tv @buffalobills” 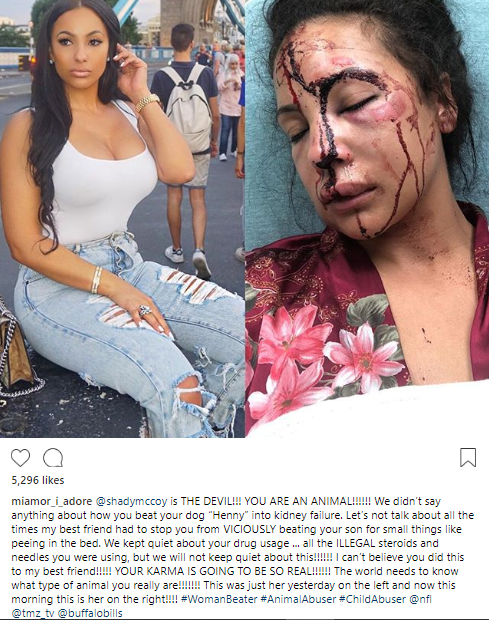