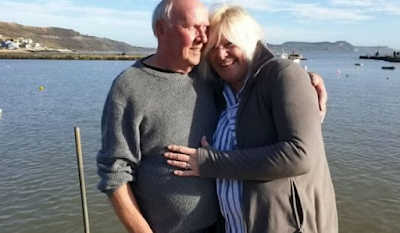 A woman was reunited with her long-lost dad after 56 years, thanks to a Facebook algorithm. Karen Harris was put up for adoption by her parents when she was born in 1964.

She was told the name of her dad, Trevor Linden, by a social worker when she turned 18.

But despite knowing he was from Croydon, south London, her efforts to find him came to nothing until a freak coincidence while browsing Facebook.

Karen, 56, saw his name pop up as a “suggested friend”. She clicked on the profile and slowly realised it was him.

She contacted Trevor, 72, from Kent, and the pair chatted before meeting last Friday.

The electrician said: “I knew I had a child but not the sex. I was on Facebook and this message popped up from a lady saying she liked my photo.

“I saw the resemblance straight away with my three other daughters. I could see she was my daughter. It’s early but I feel we know each other quite well.”

Karen, from Penryn, Cornwall, said: “I’ve found connection and completion, and I’m cherishing it. Those adopted understand the moment you first see someone other than yourself in a mirror with your cheekbones, eyes and chin.”

Karen traced her mum 10 years ago. Her parents had her out of wedlock in their teens, which Karen said “wasn’t the done thing in those days”.

Algorithms sort posts and friend suggestions based on relevancy to users.

Trevor added: “If it wasn’t for Facebook we wouldn’t have met. It’s surreal.”

And the grandfather Trevor, who has now retired, said he did not even know the sex of his adopted child until Karen got in touch.

He said: “When she was born she was adopted straight away. I knew I had a child but not the sex of it.

“I was on Facebook and it suddenly popped up with this message from a young lady saying she liked my photograph.

“The message was, ‘Oh, I loved your photographs from the 1960s.’ I was a bit flattered that someone said they liked my photos.

“It was so surreal. She put a photo on there and I could see the resemblance straight away with my three other daughters.

“I could see she was my daughter.

“We chatted for a bit and I then got it out of her that she was my daughter and she said she had been trying to trace me for a while.

“That was only at the end of November so it has only been seven weeks.

“I have three other daughters who have not met Karen yet. We are taking things a bit easy as it is a big shock for everyone. She has got four children so I have new grandchildren I would like to meet at some point. I am so lucky she found me.”